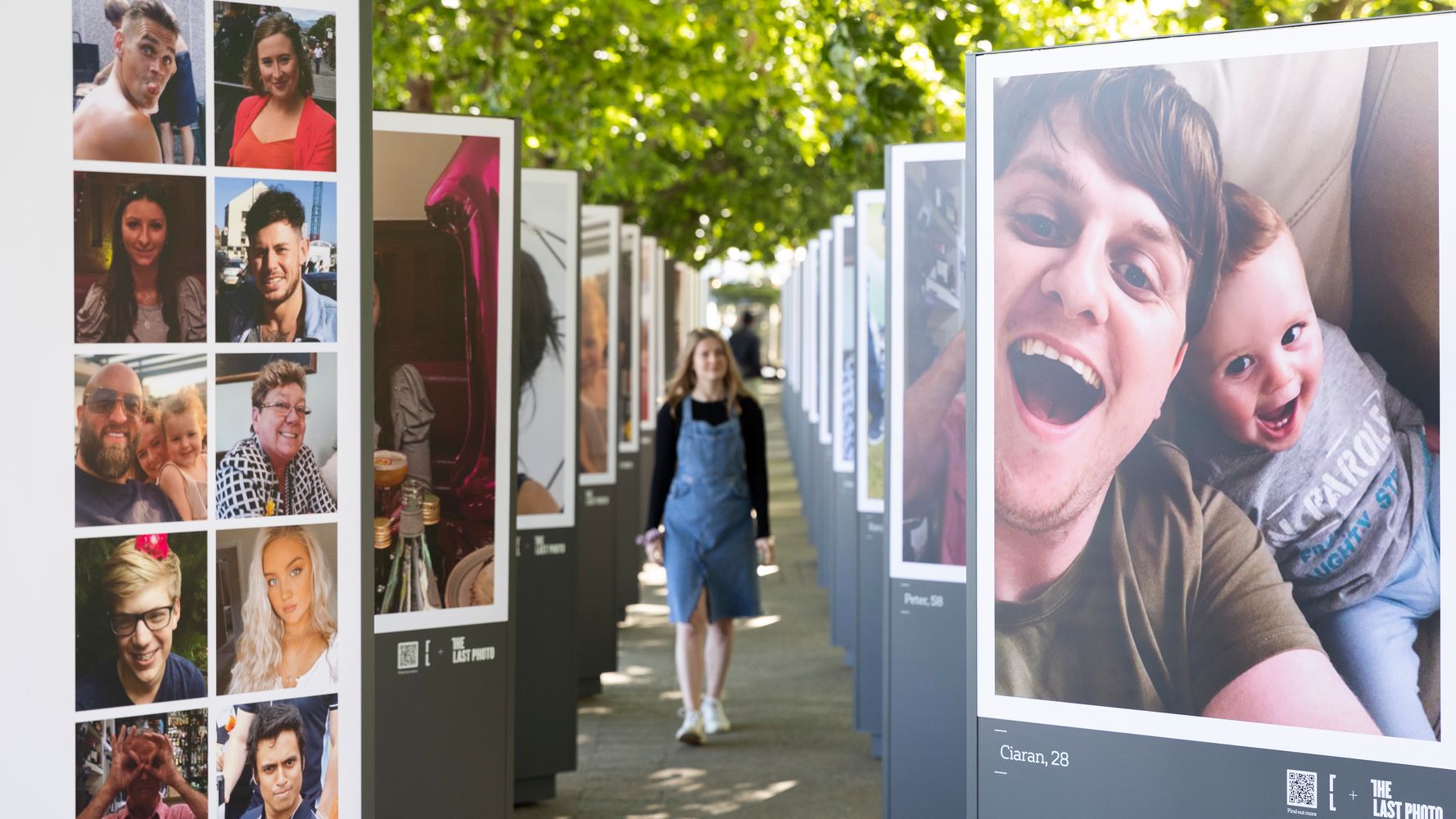 A series of portraits, each over two meters high, smile at passers-by on London’s South Bank, along the River Thames.

The images are part of a new exhibit, The Last Photo, created by suicide prevention charity the Campaign Against Living Miserably (Calm) to show the many faces of suicide.

Tragically, there are currently 125 people who die by suicide every week in the UK, but 61% of people say they would find it hard to tell if someone they knew was feeling suicidal. The poignant outdoor gallery displays photos taken in the last days of the lives of 50 people.

One of the faces shown is that of Rob Bell, the late husband of author and journalist Poorna Bell. Rob died by suicide in 2015 at the age of 39.

The photo, taken by Poorna, shows Rob waiting for a train after a James Taylor performance a few months before he died. “He couldn’t stop smiling and hummed Something In The Way She Moves,” Poorna recalled. Seeing the six-foot-tall portrait of her husband on the Southbank brought up “a great mix of emotions”.

“It was incredibly difficult to see his photo under the summer sky, considering why he’s there, and the 49 other people in the exhibit. But it was also very beautiful and poignant,” she tells HuffPost UK.

“Suicide is a death that can overshadow what we remember about someone’s life, and seeing his smiling face, and remembering the moment I took that photo brought back a lot of good memories, as well as the sad ones.”

The exhibition was launched in conjunction with research conducted by YouGov for Calm, revealing new insights into the public’s understanding of suicide.

Only a quarter (24%) of people think that someone with suicidal thoughts would also smile and joke and only 22% of those surveyed thought they would share happy photos on social media. The reality is that suicidal
behavior takes many forms, with many struggling to put on a mask to disguise their inner turmoil.

Despite the progress made in recent years, stigma, fear and a lack of understanding about how to help prevent conversations that can save lives.

A third (33%) of respondents say they would be too uncomfortable to ask if someone was suicidal if they misunderstood the situation. While more than half (51%) aren’t sure how to help someone if they said they were having suicidal thoughts.

The aim of the exhibition is to get people talking and to dispel some of those misconceptions.

Simon Gunning, CEO of Calm, says: “People tend to think they already know what suicide looks like – withdrawal, crying, silence, etc. – and if they don’t see these qualities in someone they’re concerned about, they hesitate. them to intervene. † In reality, suicidal behavior takes many forms.

“People who struggle can put on a mask to hide their inner turmoil before committing suicide. Calm’s goal is to raise awareness of this fact and equip people to take collective action.

“If we can all start one conversation with our friends and family about suicide, together we can break the stigma that surrounds it. If you don’t know what to say, or what to do when someone tells you they’re having a hard time, Calm has the resources to help. It may feel awkward at first, but starting a conversation today can really save a life.”

Poorna Bell hopes the campaign will help people realize that suicide is something that can affect anyone and any family.

“The photos capture that in such a powerful way. All genders, all ages,” she says. “I also hope they understand that suicidal people often don’t look suicidal, and while prevention is about many things, from what we value as a society to providing adequate health care, it’s also about arming ourselves with information about the signs. what we should watch out for. †