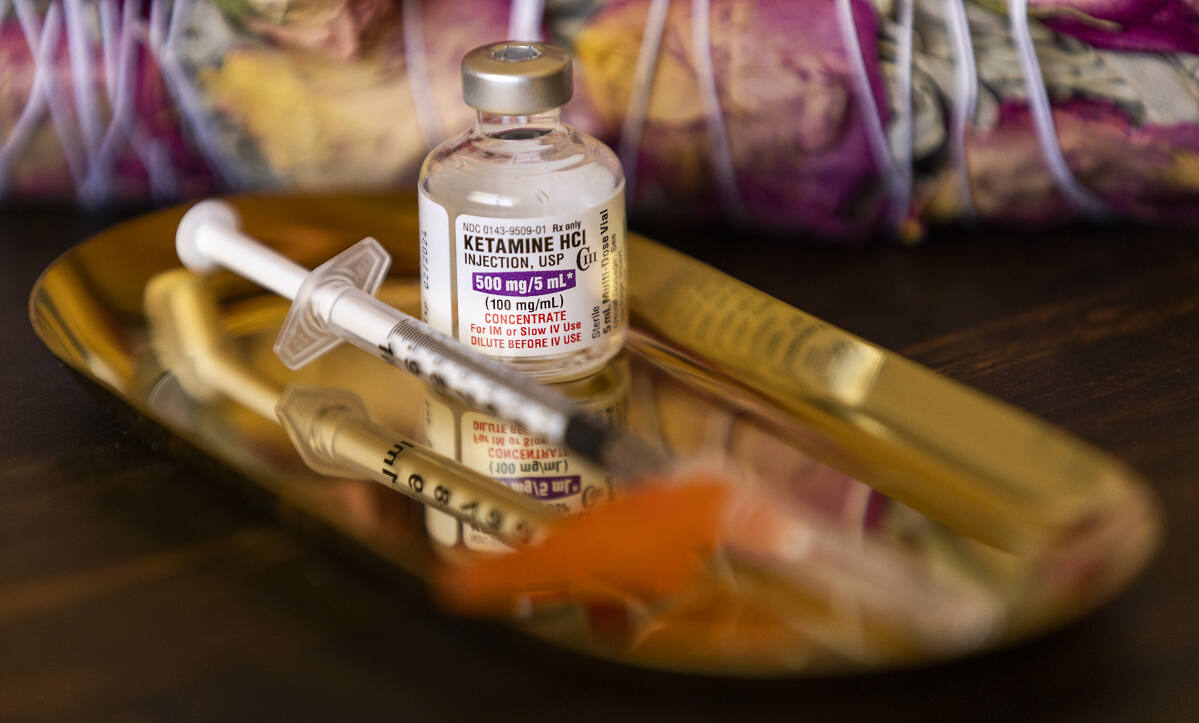 A psychedelic therapy center in Sebastopol that uses ketamine to help people suffering from depression, suicidal thoughts, post-traumatic stress disorder, drug addiction and anxiety has reopened its doors after closing during the pandemic.

Evolve Mind Wellness opened in 2018, part of a growing trend in behavioral health that foresees wider use of psychedelics to help patients dive deeper into psychological problems, said Dr. German Ascani, a psychiatrist and co-founder of the center.

Evolve reopened its doors in November 2021 but celebrated its official open house on Saturday.

Ketamine has been around for decades and is best known for its use as an anesthetic. But it also has applications for pain relief and in palliative care, intensive care and procedural sedation.

“We use it in a psychotherapeutic context, meaning you take the drug to amplify or catalyze a process of further exploration in the psyche, in the psycho-spiritual world,” Ascani said.

Ketamine is currently the only legal psychedelic that can be used by behaviorists to treat psychological and emotional problems.

But Ascani and others involved in ketamine-assisted psychotherapy hope one day to offer therapy services with MDMA (or ecstasy) and psilocybin (the psychoactive compound in “magic mushrooms”) once they’re approved by the Food and Drug Administration.

Ascani said that using psychedelics is just another tool that allows people to explore their psyche from a different perspective than traditional forms of therapy or treatment with commonly used mental health drugs.

“It allows you to witness your own trial,” Ascani said. “Psychedelics lend themselves well to working with trauma because it takes on a certain somatic experience of self and being … it can be helpful in retrieving memories and reconsolidating memories in a non-reactive manner.”

In traditional therapy, trauma is sometimes reactivated or relived, he said.

Ascani, who received his ketamine training from Dr. Phil Wolfson at the Center for Transformational Psychotherapy in San Anselmo in Marin County, co-founded Evolve Mind Wellness with Celeste Monnette, a licensed clinical social worker who worked as a therapist for about 25 years.

The doses of ketamine in Evolve are administered by a doctor either via lozenges or intramuscular injections. Monnette said most people start with lozenges because it’s a more gradual experience.

“It’s a nicer way to start because they’re even more on their own, like they’re starting to feel it coming on. We’re having conversations about it,” she said, adding that injections work faster and have a “stronger, deeper” experience.

Because ketamine is an anesthetic, many people have a relaxing, “gentle experience,” she said, adding that the experience can last anywhere from 30 minutes to an hour.

Monnette said she did her first training in ketamine-assisted therapy about four years ago. The training included an “experiential component” that for her was a transformation in terms of what the drug had to offer when combined with psychotherapy.

Monnette soon began working with Ascani at the San Anselmo clinic, and when Ascani left to start a clinic in Sebastopol, Monnette joined him.

“It was a really remarkable and exciting experience, and it’s a really interesting kind of work,” Monnette said. “I’m really hopeful in terms of my experience with what it can offer clients…basically reducing suffering.”

dr. Suegee Tamar-Mattis, a staff physician at Evolve, said most people need between three and six treatments. The sessions, she said, are an “intensive treatment model.”

“The cost is actually about the amount of time you spend with the therapist, so you can think of this as paying a therapist over a period of a year, or paying over the period of 6 sessions in 6 or more weeks,” Tamar-Mattis said in an email.

The cost of the treatment is comparable to that of the Temenos Center for Integrative Psychotherapy in Petaluma, which opened four years ago and also offers ketamine-assisted therapy.

Jessica McIninch, a clinical psychologist and co-owner of Temenos, said a full treatment protocol, which includes a preparation session, intake, and drug treatment, can cost between $4,000 and $8,000. But McIninch said the clinic does its best not to turn people away from service, so if they can’t do an entire protocol, they might get a chance to do parts of it.

Payment in both centers is cash, as insurance companies do not yet cover the treatment. McIninch said she was pleased with the arrival of the second psychedelic therapy center – to her knowledge – in the province.

“We’re happy to see this work spreading more and more,” McIninch said. “Many of the people at Evolve are our colleagues, some of them we train together with… Sure, Sebastopol and Petaluma are close, but it’s not the same demographic region. We have people flying in from other states to get this job.”

McIninch said the treatment at centers like Temenos and Evolve essentially lowers clients’ defenses, “their defense structures enough to do very deep work.” In traditional therapy, she said, clients are reactivated when they talk about their trauma.

With ketamine, McIninch added, people are in a relaxed frame of mind where they can do the work faster that can take a few years in traditional therapy.

“People will often call it a game changer,” she said. “It’s the most effective tool I’ve had as a psychologist in the more than 20 years I’ve been doing my job. I can’t imagine doing psychotherapy now without… it’s like going from two-dimensional therapy to three-dimensional therapy.”

Ascani said the Evolve clinic will continue to specialize in comprehensive mental health treatments involving psychedelics as they come online after federal approval.

“Psychedelics are not yet a panacea or panacea, but are an “amazing added mental health modality that will help many and may destabilize some.”

The founders of Evolve hope to become a comprehensive entry site for MDMA. Tamar-Mattis said the certification process takes some time, but most Evolve providers have completed the required MDMA training and Ascani is involved in MDMA research.

You can reach Staff Writer Martin Espinoza at 707-521-5213 or [email protected] On Twitter @pressreno.