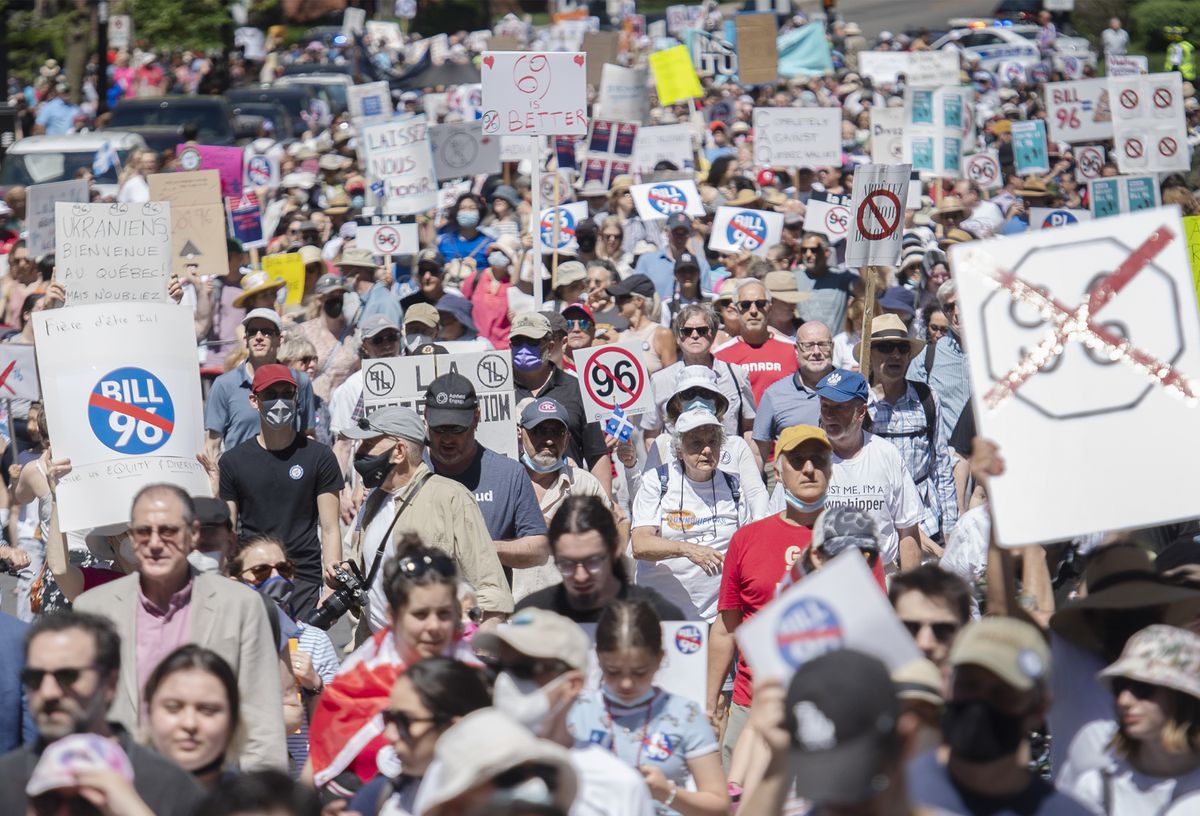 Quebec’s government has completed the largest expansion of its language laws in more than 40 years, enacting new rules to strengthen the use of French in public service, education and business, despite bitter opposition from the English-speaking minority. in the province.

With the approval of controversial Bill 96 on Tuesday, Prime Minister François Legault said he wants to strengthen the place of Quebec’s official language amid what he calls its decline. Meanwhile, many Anglophones, immigrants and indigenous people in the province say they feel they are being targeted by a law that undermines their rights.

After a year of heated debate, the bill passed by a vote of 78 to 29, with support from the ruling coalition Avenir Québec and the left-wing opposition Québec Solidaire party. The provincial liberals voted against it, saying the bill went too far, and the separatist Parti Québécois, saying it didn’t go far enough.

In defending the law, Mr. Legault cited the linguistic precariousness of French in a predominantly Anglophone continent.

“I know of no linguistic minority better served in its native language than the English-speaking community in Quebec,” he said on Tuesday. “We’re proud of that, and we’re also proud to be a French-speaking nation in North America, and it’s our duty to protect our common language.”

The battle over the legislation has heightened linguistic tensions to a point not seen in decades, some observers say, sparking fear and anger in the English-speaking community.

One of the provisions of the new law is a limit for enrollment in English CEGEP system and three compulsory French classes for students attending these colleges; a requirement for companies with 25 or more employees to make French in the workplace “generalized”, rather than 50; and a six-month deadline for new immigrants, after which public services will be offered exclusively in French, with some exceptions.

The Quebec Office of the French Languagee, charged with enforcing the county’s language laws, will also have expanded search and seizure powers when investigating complaints.

Despite legal concerns, the law will be shielded from certain constitutional challenges — based on Canada’s Charter of Rights and Freedoms — because of the CAQ government’s reliance on the clause notwithstanding.

The bill’s passage will also affect the rest of Canada, as Bill 96 claims to unilaterally amend Canada’s Constitution to claim that Quebeckers “make up a nation” and that French is the “common language of the nation of Quebec.” The province’s right to amend the Constitution in this way, and the implications of its amendments, are disputed by some legal scholars.

In Vancouver, Prime Minister Justin Trudeau did not say Tuesday whether his government would intervene in court against Bill 96.

“It is the job of the federal government under my care to always be there to protect minorities in this country, especially official languages minorities,” Mr Trudeau told a news conference. “I was a French teacher here in BC. I know how important it is to support French-speaking communities outside of Quebec, but it’s also extremely important to make sure we protect the Anglophone communities within Quebec.”

Opposition to the bill has flared up in recent weeks as its adoption was imminent. Thousands gathered in the streets of Montreal on May 14, a protest attended by Quebec Liberal Party leader Dominique Anglade.

“We need to stop dividing Quebeckers; we need to unite Quebeckers,” she said.

This spring also saw the creation of two new political parties devoted in part to opposing Bill 96, after months of ambiguity from the Liberals, the traditional party of Quebec’s Anglophones. Anglophones have been further stung in recent months by the provincial government’s cancellation of a planned expansion of Dawson College in Montreal and Mr Legault’s refusal to participate in an Anglophone debate during the upcoming provincial election campaign.

“The mood in the English-speaking community is pretty bleak right now,” said Joan Fraser, a former senator and editor of the Montreal Gazette, who now sits on the board of the Quebec Community Groups Network, an advocacy group for England. “It’s like we can’t be considered Quebeckers, real Quebeckers. That may be an exaggeration, but some aspects of this bill encourage that kind of thinking.”

Other critics argue that the law could jeopardize access to essential services in languages ​​other than French. Robert Leckey, dean of McGill’s law school, said banning judges from speaking another language unless the minister concerned deems it necessary could harm the fundamental right to interact with the legal system in English or French.

Quebec’s Bill 96 has its merits, despite one big mistake

It’s also unclear whether the bill exempts health care from the general requirement for government agencies to use French when communicating with the public, Prof. Leckey said. Despite government guarantees to the contrary, the result could be doctors or therapists being punished for speaking to patients in another language, he says.

“It says the civil administration will use French,” said Prof. Leckey. “If you want to emphasize that there is an exemption for healthcare, put that in the bill.”

Legault’s government has maintained that claims about limited access to health services in English are false — the Prime Minister recently called them “disinformation” — pointing to a provision in provincial health law that gives English-speaking people the right to receive health services in English. , in accordance with the resources of the institution that makes them available.

Christopher Skeete, a member of the National Assembly and the person of the CAQ point for relations with Anglophones, said the bill’s critics overestimated its dangers because of an emotional response to a sensitive debate.

“What they bring into their discussion is concern, fear and anxiety and that clouds their ability to see the law for what it is,” he said.

Bill 96 also faced harsh criticism from Quebec nationalists seeking to protect the French. The Parti Québécois, along with many sovereign commentators, wanted Bill 101, the Charter of the French Language, to be extended to CEGEPs, preventing French speakers and allophones from attending English colleges. PQ leader Paul St-Pierre Plamondon said Bill 96 would not stop the decline of French in Quebec.

With reports by Ian Bailey and The Canadian Press