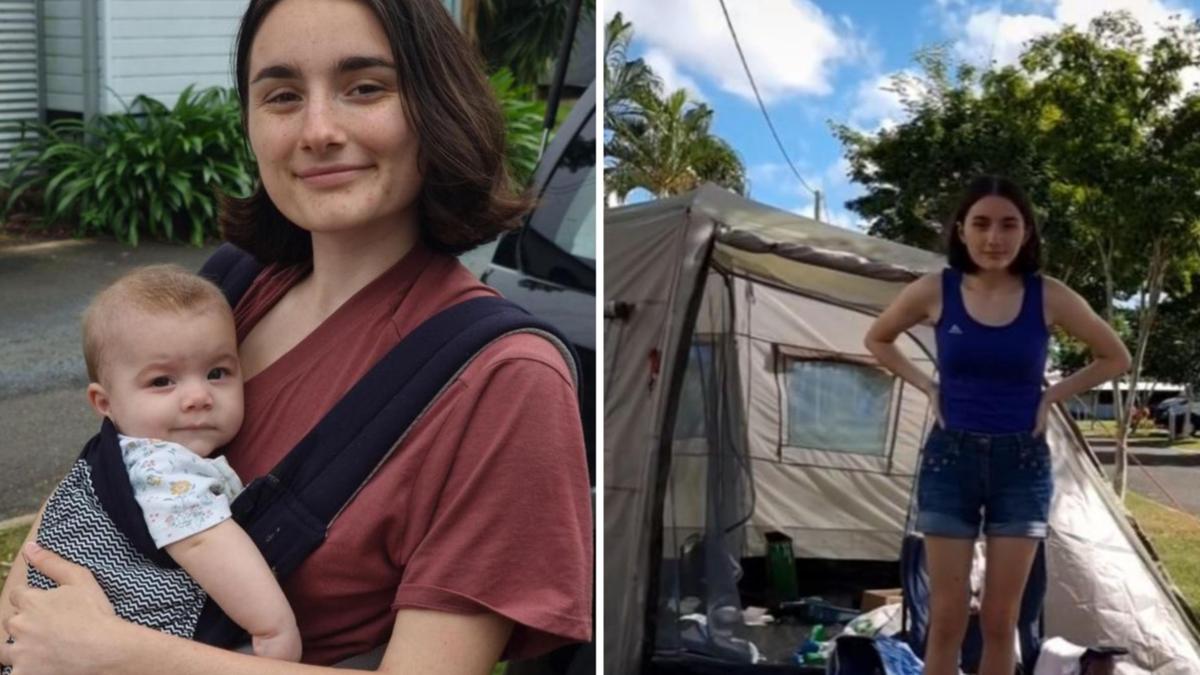 A family of four has been forced to live in a tent after their struggle to find a home led to homelessness – as the rental market crisis escalates across Australia.

Susannah Taylor, 20, lived in a rented house with her husband Tristan, 22, and their two daughters – two-year-old Delilah and six-month-old Luna – in Roma in southwestern Outback Queensland.

WATCH THE VIDEO ABOVE: Susannah talks about her homeless family life

However, the family is now living out of a tent at campsites around Bundaberg after their landlord decided to sell the property last month.

“We had a nice little rental in the country and we’d been there for about two years. But our landlord sold the house and we couldn’t find another rental home in time, and our neighborhood had become unaffordable to rent,” Susannah said. 7Life.com.au†

Their challenges mirror the realities of the country’s housing market – as the couple struggles to find a new place to call their home.

Dragging their belongings in the car, the family moved from campsite to campsite.

“We miss a lot of food, basic hygiene is difficult to maintain, it really overheats in the tent and then it gets really cold,” says Susannah.

‘Being homeless is expensive’

“And the hardest would be the financial challenges, being homeless is expensive.

“We do our best, but sometimes it’s just not enough. Now we just surf around in a tent, we look for safe places to sleep.”

The mum-of-two says she has been filled with “a lot of fear and insecurity” since her family slipped into homelessness.

“We’re applying for work and I’m on Centrelink. We only had job interviews today,” she says.

“The plan is to find a job and keep it in a tent until we can get a rental home.”

The couple are desperately applying for jobs in retail, hospitality, warehouse and cleaning.

“I apply for weekend work and my husband applies for part-time to full-time work,” she says.

“Me, though, I’ve been a stay at home mom for the past two years, so it’s going to be a little harder for me to jump back into it, but I’m trying.”

Her husband has applied for more than 40 jobs, but was only called back for three interviews.

“My husband is even considering an internship,” she says 7Life.com.au†

‘The problem is the rental crisis’

As the situation takes its toll on the family, Sushannah documents their struggles with homelessness on TikTok.

“My husband worked full-time before we became homeless,” she says.

“Obviously we can’t stay too long at one campsite because other people want to book in advance. It’s just the constant of having to move.

“I know where we’ll be until Saturday, but come Saturday morning, I don’t know what we’re going to do.”

The mother says they have tried everything to find long-term shelter – but to no avail.

“I called the homeless shelter, but they are all full, no surprise,” she says.

‘We have the money to move to a rented house, we have that money. The problem is the rental crisis, there are no affordable housing.

“And even when there are homes that are affordable, they are extremely competitive. So I’m not doing as well as I’d hoped. I’m pretty nauseous right now, but that’s a feeling I’m used to at the moment.”

‘There are people much worse off than me’

Generous strangers have offered money or opened their homes to the family of four to keep them off the streets.

“Unfortunately, I can’t take anyone’s money. There are people who are much worse off than me and they need your money much more than I do,” she says.

“I have savings. I have always saved for a crisis like this because I knew what state the country was in. So until I got really desperate I can’t take your money – but thank you so much for the offers.

“As for the offers for beds, my family and I have already uprooted ourselves and moved six to seven hours from where we previously lived to find a safer location.”

While, out of desperation, she has since taken money for a few small things, she says the only things the family really needs right now are a job and a house.

“We have the money and the rental history, but there just isn’t much available,” Susannah says.

An Anglicare study found that of the 45,000 properties analysed, only seven were affordable to someone on a jobseeker’s payment.

Less than 1 percent was affordable for people on disability benefits or old-age pensions.

“Australia’s housing crisis has reached its peak. No part of the country has been spared. Rents are skyrocketing in cities and regions, and our cities have never been more expensive,” said Kasy Chambers, director of Anglicare Australia, in April.

“We keep hearing that these elections are about the cost of living, but housing is the biggest expense for Australians. Low-income people don’t stand a chance. Less than 2 percent of rents are affordable for a full-time worker on the minimum wage. For someone without a job, that is 0 percent.

“Voters are desperate for action. Instead, parties promise more of the same. At best, they offer subsidies that overheat the market. At worst, they ignore the problem and tell the struggling tenants to buy a house. That’s not good enough.”