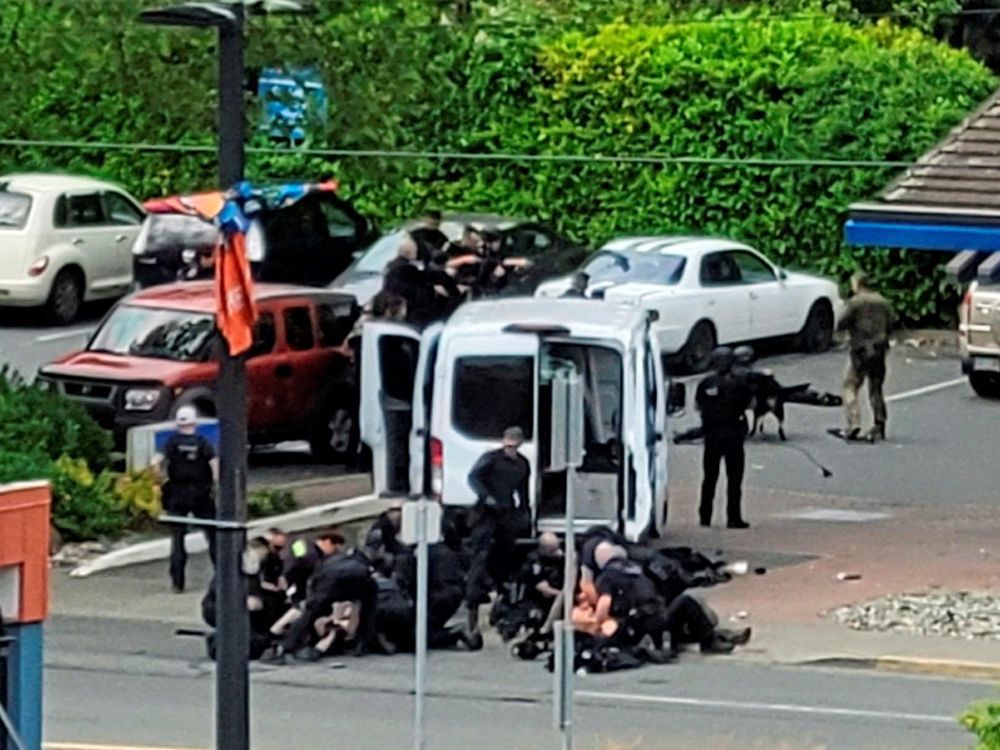 SAANICH, BC – Two robbery suspects believed to be wearing body armor died Tuesday in a barrage of bullets exchanged with police outside a bank in Saanich, BC, on Tuesday.

Saanich Chef Const. Dean Duthie said some homes in the area also had to be evacuated as police were investigating a possible explosive device in a vehicle linked to the suspects.

He said he had never seen such violence in Saanich in his 27 years as a police officer.

“This is something that shakes up a community,” Duthie told media outside the Saanich detachment. “People will be affected by this and we are aware of this.”

Later Tuesday, police withdrew an in-place shelter recommendation for other residents in the area saying they had found no further evidence of a possible third suspect involved in the robbery.

Duthie said police believe some of the six officers will be released from hospital soon, while others have more serious injuries and have undergone surgery.

Officers received a report that gunmen had broken into a branch of the Bank of Montreal, but Duthie said the shooting started when the suspects left the bank, creating a situation that was very dangerous for the public.

“I don’t know at this point who fired first. But several shots were fired.”

He said the two suspects who were shot by police died on the spot.

Duthie said he was grateful that no customers, bank employees or other members of the public were injured in the shooting.

“From what I have described to you and what I know about that chaotic, tragic, dynamic, violent scene, the fact that no civilians were injured in any way is truly astonishing.”

Jacob McAndrews, owner of Gordon Head Paintworks in Victoria, had driven into a sushi restaurant next to the bank when he said he saw police on the corner with assault rifles.

“I asked them if I should leave, and they said just park in the corner and duck down.”

Then McAndrews said he started filming.

His video shows a police dog barking as he leads the armed officers around a corner. Sounds of dozens of gunshots follow. One officer is seen firing his gun while another officer runs toward the building with a gun in hand.

“This is the first time I’ve ever heard gunshots in Victoria,” he said. “Hopefully it was a one-time thing.”

Duthie said the emergency response team was deployed on Tuesday and was not far from the crime scene.

“Their prompt response was invaluable and ensured that this situation was resolved quickly. We are so thankful for their service.”

Saanich is a community of approximately 120,000 people in the greater Victoria area of ​​Vancouver Island. It has its own police force.

Greater Victoria’s emergency response team is a mix of officers from different detachments. Three of the injured officers are from Saanich, while the other three are from Victoria.

The Bank of Montreal said in a statement it was deeply saddened to hear of the incident and thanked emergency services for their prompt assistance in keeping the public safe.

“The safety and security of our customers and employees is our priority and our thoughts are with every person affected by today’s events,” it said.

Tracy Yarr said she went through her house locking the doors and windows shortly after police issued an advisory telling people to stay indoors and avoid the area.

“I locked everything,” she said, adding that the shooting had taken away a sense of comfort and calm.

“This is really amazing for us,” she said. “I mean, shocking.”

BC Public Safety Secretary Mike Farnworth issued a statement saying his thoughts are with the officers, their families, friends and colleagues and wishes them a speedy recovery.

Farnworth said the shooting is a powerful reminder of the critical role police officers play in keeping neighborhoods safe.

“As always, first responders and volunteers came to the rescue quickly, too, and we really appreciate their dedication.”

— With additional reporting by Hina Alam in Vancouver