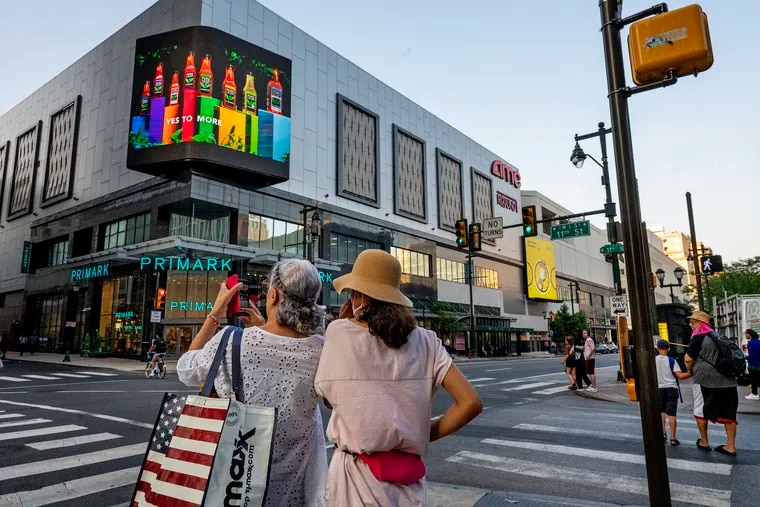 The 76ers’ managing partners are teaming up with Philadelphia apartment developer David J. Adelman and others in a proposal to build a new NBA arena on 10th and Market Streets, which they believe will open up investment and employment opportunities. create in a city that needs them.

Josh Harris and David Blitzer of the Sixers plan to tear down a block from the Philadelphia Fashion District shopping center (formerly Gallery) and, like other National Basketball Association teams, build atop a major public transit hub. The block is home to SEPTA’s Jefferson Station and a Market-Frankford subway station, as well as a short walk to the PATCO trains to South Jersey. It is connected to parking garages a short drive from I-95, the Vine Street Expressway, and the Ben Franklin Bridge.

“We’re going to have our own Madison Square Garden,” but newer, with a “world-class team in a new shiny arena,” Adelman told The Inquirer ahead of Thursday’s scheduled announcement.

The $1.3 billion project would take up to nine years to plan and build. It would be ready by the time the Sixers lease expires at the Wells Fargo Center in 2031.

“This is huge,” said Paul Levy, president of the Center City District. It would be “one of the most accessible arenas in the country”.

The details will fall under a team led by Adelman, who have chosen Harris and Blitzer to chair the project’s development company, 76Devcorp. Their own company’s chief real estate lieutenant, Jonathan Fascitelli, serves as chief executive.

“Arena are evolving towards the center, in the urban core,” said Fascitelli. “They bring people together, which can drive meaningful economic revitalization and improve quality of life.”

The new arena would seat 18,500, less than the 20,478 capacity in the current South Philly home of the Sixers, which the team shares with the Philadelphia Flyers of the National Hockey League.

“We have had a great partnership with the Sixers for decades and look forward to welcoming the team to this world-class facility through at least 2031,” Comcast Spectacor said in a statement Thursday. “We have invested hundreds of millions in addition to the City, Phillies and Eagles to make the South Philadelphia Stadium District an incredible destination for sports, entertainment and our passionate fans.”

» READ MORE: Everything we know about the Sixers’ plans for a new Center City arena

Macerich, the California real estate company that operates the ailing mall, has endorsed the Market Street proposal as “a natural evolution” of the property, CEO Thomas O’Hern said in a statement. The Fashion District opened in 2019 after more than $300 million in renovations to the former gallery, but has lost sales due to the COVID-19 closures of the past two years.

Adelman said the project would not demand city dollars, unlike many U.S. professional sports facilities in the past 50 years, although a 30-year agreement that cuts property taxes for the site will remain in effect through 2035.

“This can get very exciting. It could be a huge win for the city and the region “if the developers deliver on the expected community benefits and rental guarantees,” said Senator Vincent Hughes (D., Philadelphia).

The project is so large that “it is very likely that some sort of ordinance or set of ordinances will have to be put in place,” said Anne Fadullon, director of urban planning. Most importantly, she said, developers need to “make sure the project works for the surrounding communities affected by this new arena.”

“I grew up watching Dr. J and Allen Iverson, from chairs a lot higher,” Adelman said. “It’s very exciting to build something good for the city. I just turned 50; we’ll play our first game there when I’m 60. So this is for our children and grandchildren.”

The plan focuses on the block between 10th and 11th, and the Markt and Hazelnootstraat. Macerich also owns properties on the south side of Market Street and, in partnership with Philadelphia-based PREIT, the shopping block east of 10th. Across the road from Filbert is the town’s Greyhound bus station; to the east is the Jefferson (formerly Aramark) office tower.

Those and other nearby properties can be expected to gain value from the arena, Adelman said, and some could become part of a comprehensive proposal.

“These are private dollars coming into a tough city that has its problems, and making a bet on the city and on the people,” Hughes said.

He noted that the developers are committed to meeting, supporting, and satisfying neighborhood groups in the nearby Chinatown and Washington Square neighborhoods.

“They have to make up for that,” Hughes said.

Asked about traffic and possible neighborhood problems, Adelman said the owners have committed to spending millions through a “public benefits agreement” to help the area. They have also promised leases to ensure that women, blacks and other underrepresented contractors make up a large portion of the workforce.

“I was born and raised in Chinatown, and this is exciting,” said John Chin, executive director of the 56-year-old Philadelphia Chinatown Development Corp., which develops affordable housing for the neighborhood. But residents would likely be “cautious” about embracing the concept.

“We know that these projects are having gentrifying effects on every neighborhood, and we need to be protected,” he said. “We will not allow any project to harm the preservation of our community.”

» READ MORE: Many from Chinatown protest against 2d Philly casino

Brown said he knew when he ended his 20-year career with the Houston Rockets to come to Philadelphia last year that he would likely help prepare a new Sixers arena — and that Harris and Blitzer were willing to spend for a championship team in a new facility.

Philadelphia sports teams and some city leaders have long searched for a downtown sports venue. The Sixers were outbid for development rights at Penn’s Landing in 2020. A Phillies proposal in the late 1990s to move to the East Broad and Spring Garden neighborhood did not receive political support, despite objections from housing and business groups in Chinatown who feared they would be relocated.

The NBA considers the latest plan “a great showcase for the city and the team” and said the owners of the Sixers “will use this development to revitalize Center City and the surrounding community,” as NBA arenas in other cities have done so, NBA spokesman Mike Bas said in a statement.

“We have the luxury of a very long time before this takes off, and we have a lot of conversations with workers, contractors and companies, knowing we’re generating a lot of economic opportunity for several Philadelphians,” said David Gould, chief diversity officer for Harris Blitzer. Sports & Entertainment and a former city official.

Ryan Boyer, the workers’ union leader who heads the Philadelphia Building and Construction Trades Council, said the project could “stimulate the construction industry in Philadelphia.”

Boyer predicted that this project would succeed where other proposals fell short “because you now have David Adelman, who understands the Philadelphia group ecosystem” and how to work with the interested parties whose support makes projects possible.

The carpenters, electricians, sheet metal workers and other unions have already begun reaching out to high schools in the city to help recruit a “diverse and inclusive” workforce for apprenticeship programs, he said, pending at least 700 new union construction jobs in the area. the Sixers site and other projects.

Adelman said consultants believe as many as 9,000 professionals, trade members and managers could eventually work on the arena.

Hughes said he expects developers to agree to hire at least 40% of workers from underrepresented communities. Mosaic co-founder Greg Reaves said he and his company colleagues are “adept at bringing in some of the most diverse professionals, architects, civil engineers, structural engineers, geotechnical engineers” and that the Sixers have made it clear that they want to work the same way. various union contractors as a “model” for other projects.

City boosters applauded the plan. “Market Street is a dead zone,” said John Fry, president of Drexel University, who said he’s been a fan of Adelman’s since they served on the first board of the University City District in 1998. this in one of our main commercial districts is exactly what we need.”

“This couldn’t have come at a better time,” councilor Allan Domb said. “It will contribute to public safety.”

The development plan unites three billionaires who met watching Sixers home games from court seats and who have become very wealthy in the US real estate and private investment boom of the past 30 years – Harris as co-founder of Apollo Global Management, Blitzer as a senior executive of Blackstone Group, and Adelman as chief executive of Campus Apartments.

» READ MORE: What If The Phillies Ballpark Were Built In Center City?

Harris, the managing partner of the Sixers, and Blitzer, co-managing partner, are graduates of the University of Pennsylvania; Their companies’ income includes annual fees from clients such as Pennsylvania’s state pension schemes. Like the owners, Adelman is not only a real estate tycoon, but also a private investor. He co-founded Philadelphia-based FS Investments and owns Darco Capital, a private equity firm.

In addition to the Sixers, Harris and Blitzer own the NHL’s New Jersey Devils and the Crystal Palace football club of the English Premier Football League.

“We really enjoyed our time at the Wells Fargo center,” said Blitzer, but are now “excited to give our fans and players an arena like they’ve never experienced before.”