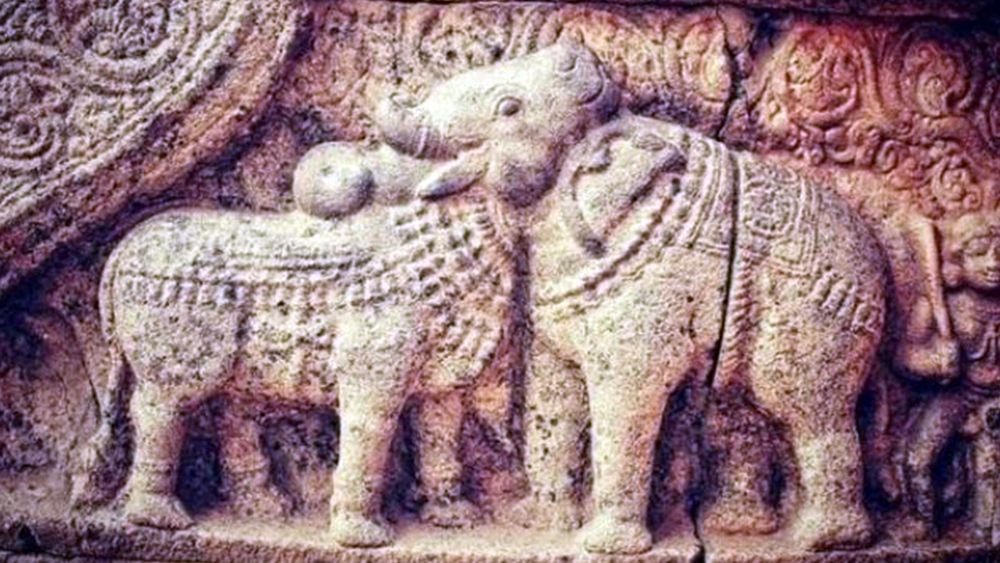 Optical illusions are the internet sensation of the moment. We can spend hours watching the latest brain teasers on TikTok and Instagram, and some of the best optical illusions generate thousands of views. But while they’re the most popular online right now after Kyle Jenner, they’re hardly a new phenomenon.

For decades, artists and psychologists have played with images that can fool our brains or that can be interpreted in different ways. But none of the optical illusions we’ve seen so far dates back as long as this one — one so old it’s carved in stone.

Airavatesvara Temple is a Hindu place of worship in Kumbakonam in the South Indian state of Tamil Nadu. It is a jewel of the Chola dynasty, built almost 900 years ago. And amongst the stunning 12th-century Dravidian architecture and carved decorations of chariots and avatars, there’s this beauty that would be at home in our pick of the best optical illusions for animals. It shows what looks like two merged creatures with one head. But which animal do you see?

If you focus on the creature on the right, you should see an elephant, while if you cover the elephant’s body and legs, the animal on the left is clearly a bull looking at the sky. The bull, Nandi, is the vehicle of the Lord Shiva in Hindu belief, while Airavat, a mythological white elephant, is the vehicle of Indra, the king of heaven. The video below separates the two creatures in the optical illusion of the Airavatesvara Temple to show what they would each look like separately.

🎥Daniel Cortes, Martinez-Conde Macknik LaboratoriesBelow is the creative representation of the separated structures of elephants and bulls. Astonishing..! pic.twitter.com/H2kJKPzPx0Dec 2, 2020

We’re in awe of many of the optical illusions we’ve seen created digitally using modern software, but the fact that craftsmen carved an optical illusion in stone so long ago is fascinating. It seems that even more than eight centuries ago, we humans liked to see images that fooled our minds.

We thought we had already found the oldest optical illusion in this 16th-century painting by Hans Holbein the Younger, but the optical illusion of the Airavatesvara Temple dates back about 400 years. And it turns out that Indian temples are full of optical illusions, as @mamatarsingh points out on Twitter.

BEYOND BRILLIANCE..!!Making objects of 3D optical illusion was just a game for our ancestors..!!If you are still in doubt, visit our temples 😄📷: Self pic.twitter.com/y0Vi99cIa8January 7, 2022

As with many of our contemporary optical illusions, this one has its own folk psychology that has grown around it. In this case, the claim is that the animal you see first tells you about your personality. If you see the bull first, you are supposed to be stubborn, fierce and tough in difficult situations (although that bull looks remarkably meek to us). If you see the elephant first, it means you are kind, considerate and loyal to friends and family.

If that matters to you, then you will love the optical illusions that are said to tell you your personality or supposedly reveal your secret dreams. Be sure to also check out our pick of the best optical illusions of 2022 yet. They may not tell you anything about your inner self, but they are great to watch. You may even want to try making your own head spinners. See below for the best prices on Adobe’s range of creative apps, including Photoshop and Illustrator.