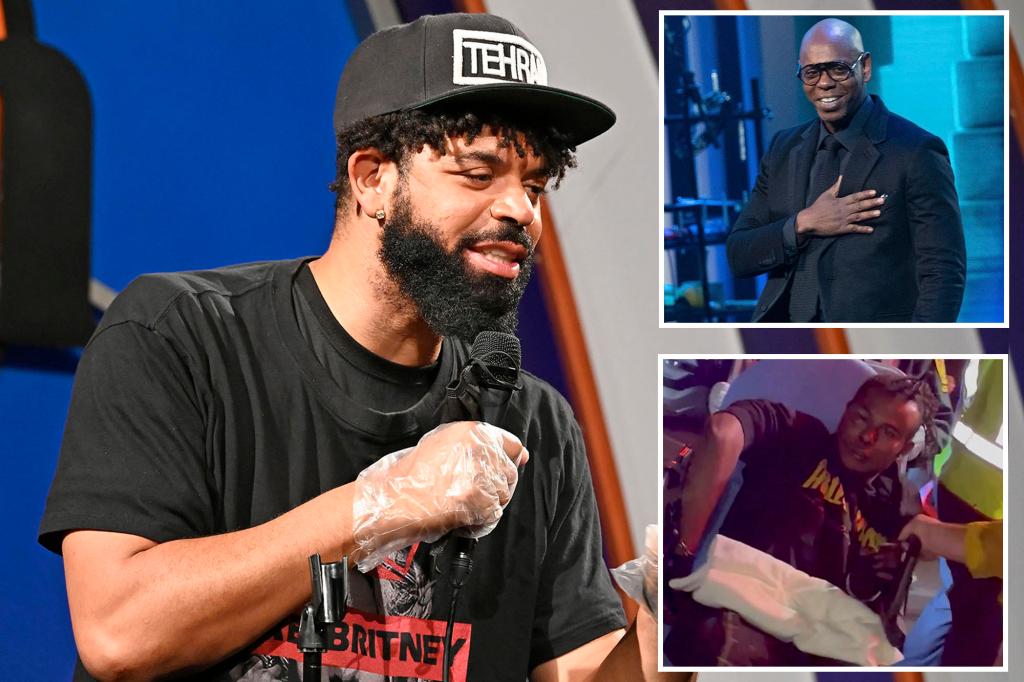 Comedian Tehran Von Ghasri said he desperately tried to alert security to Dave Chappelle’s alleged attacker after he snuck into the VIP area, but the guards “fired” him.

“I wasn’t just there, I was there,” Ghasri told TMZ of his VIP spot at Tuesday night’s Hollywood Bowl show.

“The attacker slid in next to me and walked up to the podium,” he said of allegedly seeing 23-year-old wannabe rapper Isaiah Lee entering the VIP area filled with A-listers suspiciously.

“I tried to warn security, but they kind of turned me away, like she wasn’t paying attention,” he said.

“I tried to warn like, ‘Hey, this person jumped the barrier and you should probably keep an eye on him,'” he told the outlet’s videographer.

Ghasri also said he feared the world would have “lost an attitude of comedy” if Lee – who police say had a gun-shaped knife – hadn’t tripped while reportedly lunging at Chappelle.

“Frankly, if the striker hadn’t been clumsy and Dave Chappelle hadn’t trained, this could have been really bad,” he said.

“This man would have been stabbed in his bag and we would have lost an attitude to comedy. Chappelle is the GOAT,” he said, using an acronym for “the greatest of all time.”

“We wouldn’t cry for the attacker – we might cry for the loss of a Dave Chappelle. So thank goodness nothing worse has happened.”

Ghasri praised Chappelle’s own security and management for being “on it” and immediately sprang into action and tackled the suspect – who was seen with a broken arm and a smashed face as he was taken to an ambulance.

Chappelle, 48, bragged to the public that he had “just stomped backstage”, and later reportedly praised his famous friends for their help.

“I felt good that my friends broke his arm. I felt good. How bad must a… be that Jon Stewart would punch him!’ Chappelle reportedly said later.

The attack sparked further outrage on Thursday when the Los Angeles County District Attorney said the on-camera attack did not warrant a felony charge.

Lee was instead beaten with four felonies: one for battery, one for possessing a deadly weapon with intent to attack, another for unauthorized access to the stage during a performance, and a fourth for committing a crime. act that delays the event or interferes with the performer.