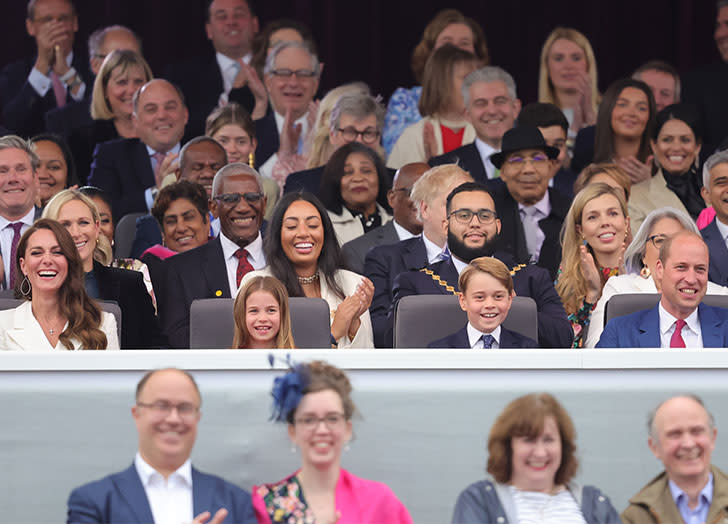 The festivities for Queen Elizabeth II’s platinum anniversary are currently underway, and the last event to take place was the Platinum Party at the Palace, a celebration of Her Royal Majesty’s reign with musical performances from major stars such as Adam Lambert, Alicia Keys , Lin-Manuel Miranda and more. And while this event was packed with big names, our eyes were on the Cambridges, who returned for the event after spending their morning at Cardiff Castle in Wales.

Prince William and Kate Middleton sat around their two oldest children – Prince George, 8, and Princess Charlotte, 7 – while their youngest, Prince Louis, 4, did not attend the event. A series of photos from the evening showed the family bursting out at something that happened on stage, and we enjoyed this rare opportunity to see the whole family laugh in sincerity.

And it wasn’t just their smile that caught our attention. This weekend, the royals made all kinds of striking statements, whether it was Prince Louis’s reaction to a flypast at Trooping the Color, or Prince Harry’s dizzying faces during the Thanksgiving service. Now Princess Charlotte is the latest royal to steal the show with her facial expressions.

During a moment of the Platinum Party, the 7-year-old was seemingly shocked by something going on onstage, and we can’t help but get over the photos that show the young royal looking utterly surprised and gaping.

While we’re not sure why she looked so shocked, we’d love to find out. Here’s hoping we get a few more meme-worthy sayings from the royals before the weekend is over.

RELATED: Prince William and son Prince George looked like a dynamic duo on their most recent outing