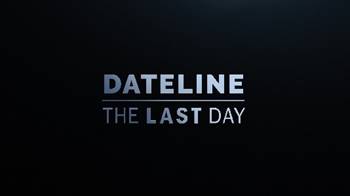 The crucial final hours of a crime victim’s life are dissected by the date line team in a new original Peacock series, Date line: the last day†

The eight-episode series bows on the streamer on June 14 and will feature new reporting from the date line team on stories that have never appeared on the broadcast edition.

NBC News correspondents Keith Morrison, Josh Mankiewicz, Stephanie Gosk and Andrea Canning examine the last day of a victim’s life—the split-second decisions and pivotal moments that made the difference between life and death. Detectives follow those crucial hours looking for clues to solve the mystery.

“When it comes to crime, date line tells those stories and captivates viewers longer than anyone else,” said Rod Aissa, EVP Unscripted Content, NBCUniversal Television & Streaming. “We are excited to have the first original series from this iconic brand on Peacock and bring even more of these stories to our streaming audience.”