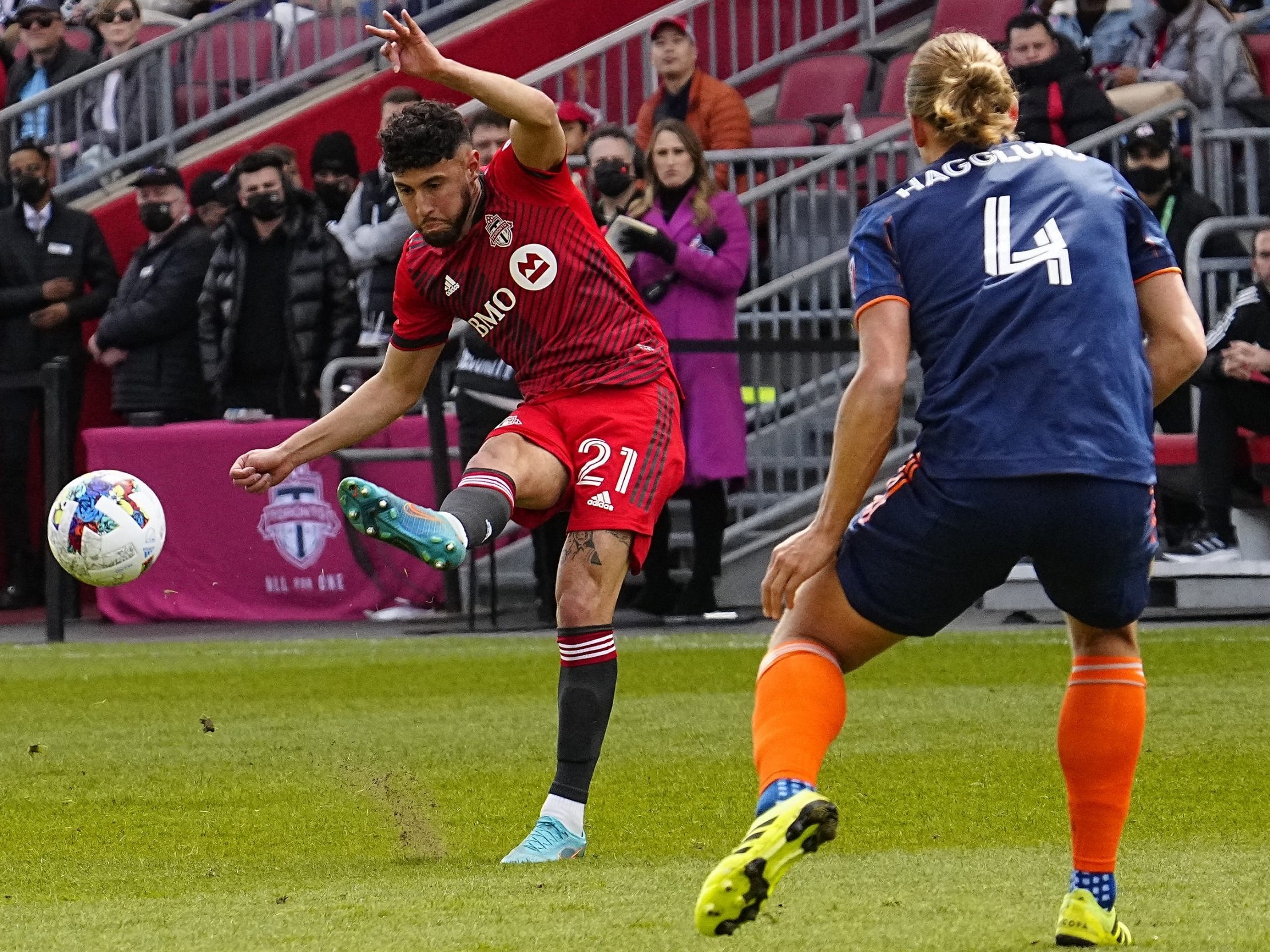 Most Toronto FC players started their game against FC Cincinnati on Saturday as if they had just crawled out of bed.

The Reds dropped a 2-1 decision to the MLS Eastern Conference bottom feeders at BMO Field due to an extremely slow first half. Toronto turned up the pressure in the final few minutes, with goalscorer Jesus Jimenez dragging TFC in one. But the comeback was disappointing and TFC has now lost two in a row. It was Jimenez’s seventh goal in eight MLS appearances since joining TFC this season from Polish club Górnik Zabrze. He is tied with Sebastián Driussi of Austin FC for the most in the league.

“It’s disappointing that we didn’t react more strongly from the start,” said TFC coach Bob Bradley. “The pace was too slow at the beginning of the race. We played according to the Cincinnati game plan. We didn’t move the ball fast enough, didn’t move forward fast enough. And then the two (Cincinnati) goals — we concede a corner with a foul. And then the second is just a second ball from a throw-in. So those are two bad goals to give up.”

The loss broke a three-game home win streak for Toronto. TFC now has three wins, four defeats and two draws this season, conceding 19 goals in nine games, the second most in MLS.

Despite the slow start, TFC was statistically the superior side, leading in possession (66%-34%) and shots (11-7). Both teams fired three shots on target. But again, the failure to play hard from the start buried the Reds.

On the good news front, striker Ayo Akinola entered the game in the 74th minute, the Canadian international’s first foray into game action since last July when he injured his knee while playing for Canada. Akinola had a chance to tie the game in the 77th minute when he caught the ball in his feet in the penalty area, but he couldn’t pull the trigger. All in all, Akinola said he felt good.

“This is only the first part of the season so not everything will be running on all cylinders to begin with,” said the Brampton resident, when asked about his impressions of the loss. “And you know, we still have a new coaching system. We have new players. So we don’t expect everything to solidify any time soon. Obviously there will be ups and downs. At the moment we are dealing with consecutive losses, but I expect that things will change, the players expect things to change. We are still keeping our heads up. I think the team has a good mentality and we are in the right mood.”

Ian Murphy scored for an exhausted Cincinnati team in the first half and Luciano Acosta in the second as the visitors took a 2-0 lead before Jimenez answered for Toronto. There were moments when TFC dominated the attack in the second half, but on the whole the Reds were once again far too inconsistent on defense.

“As a team I still feel we need to be more consistent and find the right way to let our best guys play at their best level,” said Bradley. “That’s one of the most important aspects of building a good team. And I think we’ve had moments this year where that went in the right direction, but I still think that overall that’s still our biggest challenge and we have to keep trying to find the right path.

The Reds lost Chris Mavinga in the 29th minute to a right leg injury, which was a shame as the veteran centre-back was just finding his form after missing several games early in the season.

Cincy’s goal came in the 44th minute after a terrible corner was conceded by Salcedo, a Designated Player who entered Toronto with a great reputation, but was very inconsistent. Murphy scored his first MLS goal of his career with a left footed shot from the center of the box to the bottom right corner, with the assist going to former TFC favorite Nick Hagglund, who headed a pass to Murphy after a corner.

Cincinnati’s second goal also came from another set, this time on a throw-in. The Toronto defenders, including Salcedo, looked lost as Acosta received the ball in the penalty area and put it right into the goal for the 2-0 lead in the 52nd minute. Alvas Powell assisted.

Jimenez’s goal in the 65th minute was brilliant. TFC pushed hard at the end of Cincinnati and the goal came as Michael Bradley passed the ball to the far post, defender Shane O’Neill then headed it into the center of the box and Jimenez scored from a right footed shot to the bottom right corner. O’Neill got an assist, his first ever in the MLS.

Toronto’s keeper Alex Bono made a massive save on Alvaro Barreal in added time when Cincy counterattacked.

As the clock went down, TFC midfielder Alejandro Pozuelo, who had been a bright light for TFC offensively throughout the game, angrily kicked the ball out of court after referee Pierre-Luc Lauziere stopped play during a strike in Toronto when a Cincinnati player went down .

The two sides meet again on Wednesday evening in Cincinnati.

From our newsroom to your inbox at noon, the latest headlines, stories, opinions and photos from the Toronto Sun.

The next issue of Your Midday Sun will be in your inbox soon.