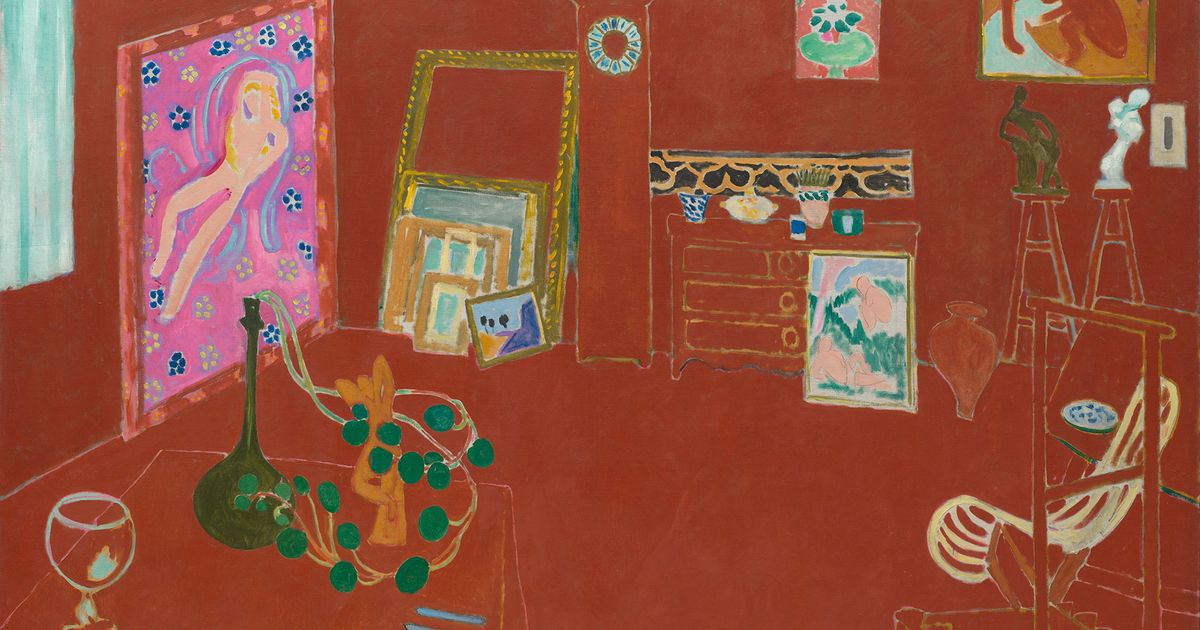 Henri Matisse’s The Red Studio is one of the most beautiful lodestars in all of modernism. Completed in 1911, it shows the inner sanctuary of his studio in the suburbs of Paris. It’s a wonder in red, a coral-colored planet, its flat, near-monochrome treatment now a mainstay of contemporary art. In this enclosed garden, we see decorative ceramics, drawing tools, a leafy nasturtium, an empty wine glass, vases and a grandfather clock with no hands, because of course time stops when artists are in creative flow. Red Studio reminds us that a studio is at once a laboratory, shelter from the storm, personal cathedral and star nursery where wonderful things are formed by unknown forces and internal pressures.

The studio is filled with paintings stacked in rows and hung haphazardly. Art lovers will spy a handful of masterpieces on the walls. If this painting were turned into a small museum, it would be one of the best there is from early modernism. This is what MoMA has tried to accomplish in a delightfully compact show that not only shows Matisse’s revelation in red, but also six paintings depicted in Red Studio, three sculptures and a beautiful ceramic plate. You look around you at this art-historical reunion and a long-gone world becomes young again. It goes off inside you like a depth charge.

“Matisse: The Red Studio” does a lot in a small space, reminding us that blockbusters can come in small packages — in this case, two major art galleries. (Don’t miss the short video on the conservation of this painting, though. It’s a lesson in curatorial care and discovery.) In this concise show, we can think about things longer, linger, make connections, see how a work can grow from a other without feeling overwhelmed, overwhelmed by numbers and exhausted at the end. More institutions should consider this scale, the scale at which the work was created. We see how an artist can traverse the universe in an incredibly compressed time and land in unexpected places. We witness an artist who not only reinvents and reinvents himself, but also reinvents art history as he does so. In these small spaces you can almost hear these mighty engines roar.

First the nudes, once considered ugly. You can see why. Nothing like this had ever existed before. Matisse modeled form to follow an artist’s imagination, imbued with the radicality of African sculpture and its elongated bodies. He is ablaze with the ways the recently deceased Cézanne had transformed arms and legs into twisting coastlines. This is the aesthetic cyclotron that Matisse spins in these few works. This is what change looks like in real time.

Here it is in the tiny 1906-7 terracotta Upright naked with arched back (the job I’d most like to have if our cat didn’t destroy it for sure). It is reminiscent of something voluptuous Neolithic, a fundamentally feminine form, but it is also about to fly apart into space. The same historical continuum is in Young Sailor II, a 1906 portrait of a boy in a chair in a peach-colored room. At first it looks like a folk painting. Look closer: the pictorial sophistication is off the charts. We see a figure simultaneously turning towards and away from us, relaxed but ready to jump, seen from below and from above at the same time. He touches his thigh, rests his elbow on the invisible back of the chair and stares at us with a come-hither look. We are his – and Matisse’s.

There’s no evidence to support this, but I’m up for the staggered, blatant Nude with a white scarf (1909) is taken almost directly from the second nude to the left of Pablo Picasso’s The ladies of Avignon, completed two years earlier. Picasso’s bent leg and knee are here, as is the arm raised above the head to fully expose the breasts and twisting torso. The main difference is that Picasso’s wife seems to be caught between lying and standing, while Matisse leans her back and makes her living flesh, not an angular monster.

Yet you see an artist who turns away from the ‘real’ world of space, structure, color, story, surface and composition – an artist on his way to new beauty, willing to risk everything. “Matisse: The Red Studio” shows us an artist portraying works he had already created and giving them a second life, a metaphor for how the work of all artists grows out of what they made or saw before. Matisse was 42 when he finished The Red Studio, approaching one of the many heights of its optical capabilities. But Sergei Shchukin, the Russian collector who, along with two others, commissioned the painting, didn’t see it that way and rejected its strange spatial architectural design. MoMA shows a plaintive letter written by Matisse in which he states: “The painting is surprising at the beginning. It is clearly new.” In vain Shchukin quickly rejects him again and writes about the weather in Moscow.

He just couldn’t see the. The perspective of Red Studio was not the “japonism” of Impressionism, or Cézanne’s visual shifts in fishing, or the 360-degree all-in-one vision of Cubism – it was utterly strange, the product of years of brutal experimentation. I’m not sure we recognize how revolutionary and “clearly new” this painting is even today.

Matisse was the avant-garde master of Fauvism, the contemptuous name (of wild animals, meaning “wild beasts”), given by critics who were disturbed by the movement’s abstract forms, destabilized spaces, and juicy paint. All this began to change when the elderly Frenchman visited Picasso’s studio. There he saw the wrecking ball shot fired across the bow of Western painting known as The ladies of Avignon. Matisse knew that with this painting the aesthetic earth had shifted on its axis and he had to react immediately.

Their rivalry was some of the most prolific and heartbreaking give and take in art history. Picasso was a total mindfuck whose Oedipal wars with older artists never ended, and he was able to produce so much so quickly that he did most of the work, while Matisse kept pace, following his own path and redefining what painting could be. . This beautiful duel set off countless atomic bombs of art: from Matisse alone, Portrait of Miss Yvonne Landsberg† View of Notre Dame† Swimmers with a turtle† dance (me)† ­not to mention the four huge, almost Mesopotamian bronze-backed sculptures. At first, Paris was enchanted. Soon, however, a side was chosen and Matisse was found wanting.

In 1913, art students burned Matisse’s work in effigy, including: Le Luxe II. Gertrude and Leo Stein, taste-masking patrons of the Parisian scene, bought fewer Matisses and doubled down on Picasso, who claimed Cubism wanted to “make sure nothing is ever more decorative.” He meant Matisse. In Apollinaire’s sympathetic words, Matisse was “one of the most reviled painters of today”. Critics attacked him as old, tame, retired. After Matisse generously introduced Shchukin to Picasso, the Russian became an avid collector of the Spaniard. Shortly after, Shchukin rejected two of Matisse’s greatest paintings, Dance (II) and Music — before he changed his mind, this time†

In 1917 Matisse finally left the Paris struggle and moved to the south of France. Here is the setting for his next incredible campaign in painting. A work that always makes me cry seems to be the final piece of his time in Paris: Interior with a violin, 1918. We see a room with one wooden hatch open. It radiates beautiful light, views of the Mediterranean and a glimpse of a palm leaf. To the left of the window is an armchair. Forget Picasso’s broken guitars – here’s a violin in an open case. You feel Matisse breathing new air, about to remove the instrument and play it, away from the Parisian rat race, on his own again, about to bring about a new kind of visual music that will arrive with its odalisques .

Now let’s take a look at The Red studio. Here’s an origami of grievous simplicity, with new geometric ordinances suggesting that the highly abstract world in his painting is a real world, imagined or not. Originally, this painting was not the flare-up sunspot it is today. The floor and walls were originally blue and green. There were slatted walls and panelling. Matisse abandoned that approach in search of a new dimensionality unlike anything painted at the time. He created the unifying field of color that, as painter Carroll Dunham put it, “eliminated a lot of static and variables and created a space, surface and frame to drive you crazy.” The resulting studio is both illusionistic and tangible, rational and insane, almost like a cave painting.

A completely flat ground recedes here, emerges there. To the left is a tantalizing glimpse of blue outside a window. There are angles, but no shadows, and the objects are as stable as Cézanne’s apples on tilted tables, but only vibrate slightly. Matisse’s lines are faint, almost non-existent, etched into the blank areas with sweeping tools. You become ultra aware of each mark and move on the surface. You can almost reconstruct how this work came about, what comes on top of it. He leaves behind all his painterly traces. This also puts you in the mind of the artist. It’s weird but amazing and makes you feel really smart because you can see this genius work like a real pro.

Matisse is no better than Picasso or vice versa. But Matisse is a polar opposite of Picasso. His compositions are not kept tightly within the confines of the painting, as Picasso’s always are. Elbows are bleeding from the edges of a Matisse. Serpentine lines disappear and then reappear on the canvas, as if the surface is folded like a curtain and yet inexorably flat. The “clearly new” reality that the Paris of the time rejected is contained in the space and place that is The Red Studio. Here is a room, a home away from home, where the beginning takes place, where the bottom falls out, the walls dissolve, time passes and we see new ways of seeing, feeling and knowing the world.