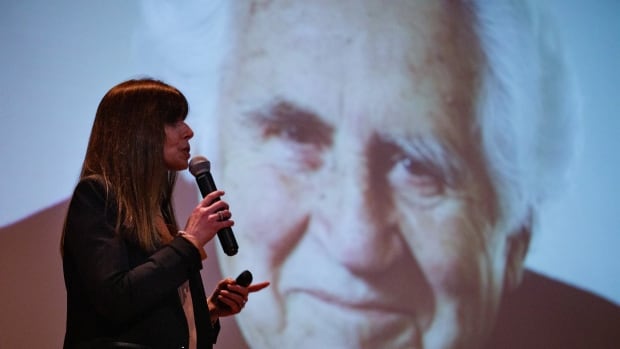 High school students in Toronto learned about the Holocaust on Thursday, not only from a survivor’s daughter, but also through the voice of her late father herself.

At a Holocaust Remembrance Day gathering for students at the North Toronto Collegiate Institute, a presentation was given by Michelle Glied-Goldstein, co-founder of Carrying Holocaust Testimony from Generation to Generation.

Glied-Goldstein started the memorial project with her father Bill Glied, who was from Subotica, Serbia. When he was 13, he and his family were taken to the Auschwitz-Birkenau concentration camp in April 1944, where most of them were murdered. He was then transferred to Dachau, where he worked as a forced laborer until liberated by the US Army in 1945. The world would eventually find out that the Nazis had murdered six million Jews, along with millions of Roma, LGBTQ and other victims.

Glied-Goldstein told the students that her father first shared his experience with the family when she was 16.

“And once he started talking, he really never stopped,” she said.

Up until that point, Glied-Goldstein said she’d always felt that there was something different about her family than that they were immigrants who spoke a different language and ate differently at home.

“There was a secret, or a burden, something that we knew wasn’t talked about at home,” she said.

Glied-Goldstein said her father then traveled across the county to talk to students about the Holocaust.

She showed students photos of various trips her father made with the family and other relatives to various locations in Europe, where events of the Holocaust took place.

Glied-Goldstein did a thorough interview with her father about his experiences the year before his death in 2018. She showed students excerpts from that interview, which she used for context about the timeline and history of the Holocaust.

She had also included clips of her father speaking on specific topics, which she used to answer students’ questions.

Arissa Roy, a North Toronto Collegiate student, told CBC News ahead of the meeting that she wants to use the pain she felt hearing these stories to make a difference in the world.

“For me, education has always been one of these tools that our world can use to build a generation that is more equal, that fights these global problems, and that knows our history so we can learn from the mistakes of the past. and build a better future,”

Grade 12 student Angela Krstic said the world is already seeing history repeating itself with the current Russian invasion of Ukraine.

“It is extremely important for everyone to know what is happening now and in the past in order to learn,” she said.

“We need to be able to recognize other people’s experiences in order to learn and grow, not just as individuals and as a family, but as a society and community as a whole.”

Student Abdi Abukar said that learning any kind of history is “essentially the only way we ever learn”.

“By understanding what happened in the past, effective for the next generation of leaders, prime ministers and what not, we can avoid that sort of thing because genocide of any kind is absolutely horrendous and a disgrace to human history.” he said .

Crucial to making a ‘human connection’

Glied-Goldstein said it is critical for students to make a “personal connection” with stories from Holocaust survivors.

“If they make that human connection, I believe it will just resonate with them more, that it will not just become history in a textbook, but actually something that they understand has happened to real people and could happen again if they don’t know,” she said.

She said she thinks the children and grandchildren of Holocaust survivors want to be the ones who continue the stories.

“Fortunately, they haven’t experienced this history, but they feel the history in their bones, and I think they feel a sense of responsibility for doing that.”