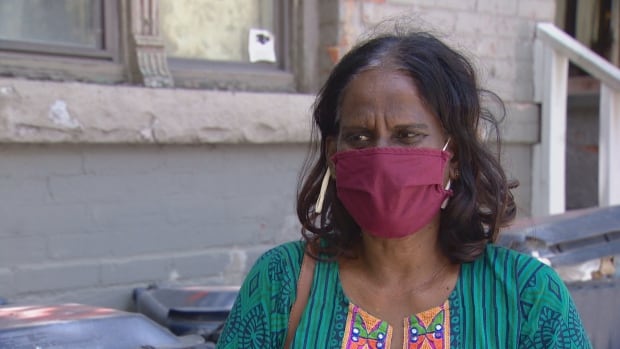 A resident of a room in downtown Toronto says her unit is uninhabitable after a neighbor’s body lay undetected in his room for weeks.

Viki Murugaiyah, 53, has lived in the house for 12 years. She says she believes the victim had been dead for about two weeks before his body was removed by emergency services more than a week ago. She says she started smelling a foul odor in late May, but thought it was because the landlord hadn’t cleaned the house for several months.

“I thought it was garbage or something,” Murugaiyah told CBC Toronto on Thursday.

She says the stench was getting worse, so she messaged several times between June 1 and 2 and called the landlord, but got no response.

The smell was so bad she “couldn’t cook or eat,” she says.

“It bothered me, I put incense in the house, I do air freshener, but it doesn’t [remove] the smell,” she said.

Murugaiyah says sometime in May that she didn’t see the elderly man again. She also noticed that she hadn’t heard a sound from his room. She says she could normally hear the television playing or some other kind of movement. She says she asked the landlord to check in with the resident.

The landlord, Jojo Ye, told CBC News she had asked another tenant to check in with the man. She says the tenant told her the man was fine.

Ye says she thought a raccoon had died in the house.

On June 14, Murugaiyah found it impossible to function in her own unit, so she called 911.

“Immediately the firefighters came … They opened the door [to the elderly man’s room] and they said he had died,” said Murugaiyah.

The body was removed from the building around 2 a.m. on June 15.

A Toronto Fire Services spokesperson told CBC News they went to the house with paramedics on June 14 after a call about a bad smell coming from a unit.

They forced the door and found the body of a man.

Murugaiyah says he has been staying with friends in Scarborough since June 15, because the room where the man died has not been cleaned and the foul smell remains in the house.

“It still stinks in the unit… I can’t eat, I can’t cook because I feel like vomiting.”

According to Murugaiyah, the room house is occupied by low-income people and they and other residents have received no help to find shelter while the building remains uninhabitable.

Murugaiyah says the house needs to be “professionally cleaned” so residents can move back into their units.

“It’s very expensive, I can’t afford it” [a new house] in this time of crisis,” she says.

Police say the case is still under investigation.

Ye says she was unable to get into the unit to clean it because it is still being held by police as part of their investigation.