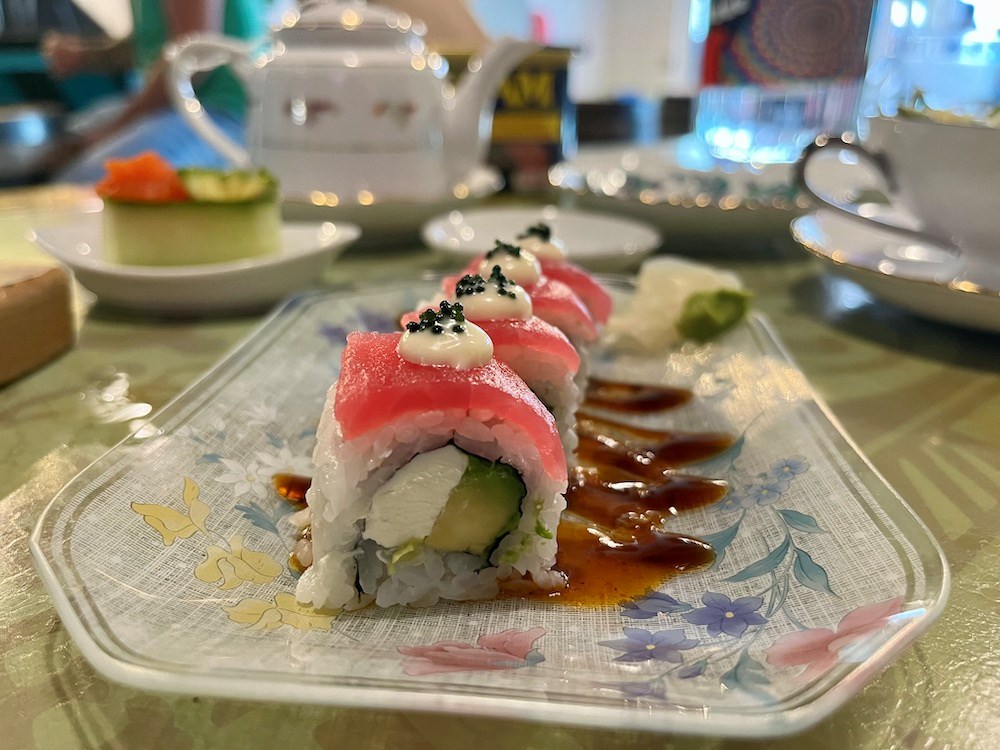 Sushi with your flight of hazy IPAs and acids? It’s Vancouver so it makes perfect sense. 🍣🍺

When Matt Ryan of Electric Bicycle Brewing travels, his dining experiences are often at the center of his stories when he returns to Vancouver. Unique food, unique experiences and a small element of the unexpected can make a visit to a restaurant, bar or taproom unforgettable, wherever you are.

Ryan and the team at the eclectic brewery had just that kind of “wow” factor in mind when they came up with a new food concept to offer at Electric Bicycle’s Mount Pleasant tasting room.

Known for being a little left of center with a menu of fruit and sour concoctions, the Electric Bicycle crew has left their mark on something different. Though the taproom had served grilled cheese sandwiches to pair with their beers and neon-powered nostalgic vibes, Ryan tells Vancouver Is Awesome that the team wanted to find a food concept that would stand out from their peers and — for more practical purposes — something they could run given the limitations of the space – as in, it doesn’t have a full kitchen.

Sushi Radio is the name of Electric Bicycle’s new food program and it has a sleek menu of super-appealing dishes that Ryan says are inspired by some of the team’s favorite items from Vancouver and beyond.

What’s on the menu at Sushi Radio?

Served on an eclectic array of vintage tableware (with the pink chopsticks presented in an empty spam tin), Sushi Radio offers a fun assortment of rolls, chunks, and easy-to-share appetizers that (almost surprisingly) pair well with Electric Bicycle’s concoctions.

Sushi Radio’s offerings include sushi bar basics like seaweed or sunomono salad, as well as chilled edamame, but with a welcome and delicious twist: lemon zest.

In addition to fresh sashimi and nigiri pieces, you’ll find Sushi Radio’s reruns of some well-known items with cult followings. One is the two-piece Spam Musubi (now you know where they get those spam cans) with a slice of pineapple spam, which Ryan says should remind you of eating Hawaiian pizza (minus the cheese and tomato, of course).

If you’re one of the legions of eaters missing out on Cactus Club’s late, great sushi bags, fear not: Sushi Radio has its take on the legendary retired menu item.

To round out the menu, Sushi Radio has an assortment of rolls, cones and pressed sushi, including fun house specialties like the Lemon Box – pressed sushi pieces with salmon and scallop and thin slices of lemon.

The quirkiness of having a small craft brewery outfit serving sushi — rather than the expected salty or greasy standards — is definitely intentional for Electric Bicycle; after all, it’s a taproom with plastic skeleton parts tucked into an Instagram-worthy floral wall installation to match a dash of spicy Technodrome Tart Pale Ale with Pink Guava and the super juicy Atomic Jam Raspberry Sour.

Currently, Sushi Radio is available Thursday through Saturday from 4-9pm in the tasting room, with plans to expand to seven days a week soon, then with lunch service thereafter (sushi is underrepresented in the area, which is increasingly has become home to several offices). You can follow @sushiradio_yvr and @electricbicyclebrewing for more information and updates.

@vancouverisawesome It’s not really a secret, but… 🤫#forkingawesome #sushi #brewery #vancouverbc : @lindsaywilliamross ♬ Walking On a Dream – Empire of the Sun