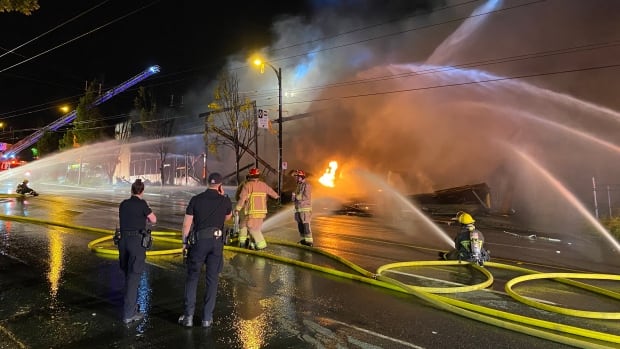 A major fire broke out late Wednesday night at a Value Village store at the intersection of Victoria Drive and East Hastings Street in Vancouver, leaving the store engulfed in flames.

“Crews arrived and found the building completely engulfed, with flames pouring from the window onto the front street,” Hesse said.

At 11:30 p.m. PT, Hesse said 90 percent of the fire had been extinguished by nearly 50 firefighters.

No injuries or missing persons have been reported, Hesse said. Photos taken after the fire broke out show the store almost standing on its foundations. Bystanders lined Hastings Street as first responders fought the fire.

“The fire damage is limited to the building itself. But surrounding buildings have suffered some smoke and heat damage,” he said.

“The crew did a great job getting water on it… but unfortunately the building was already fully involved so very difficult to save much there.”

Eyewitness Mary Ho told CBC News she could feel “the heat from across the alley” near the Value Village store.

Hesse said the streets around the intersection, which borders busy Commercial Drive, are likely to remain closed for most of Wednesday evening while crews clear up and firefighters arrive.

The cause of Wednesday night’s fire has not yet been determined.