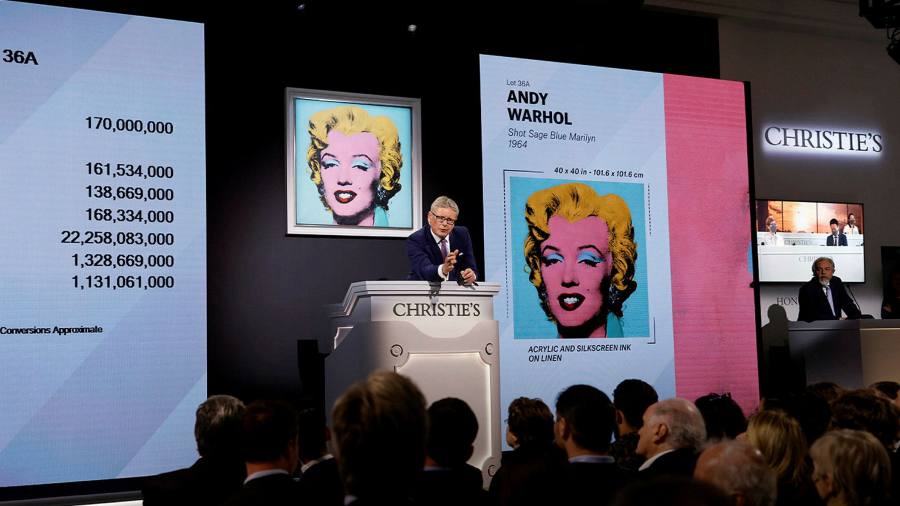 “Gallerymen have traditionally proven to be the best collectors,” said Alex Rotter, Christie’s chair of 20th- and 21st-century art, ahead of the May 9 sale of 36 works by the late Swiss siblings Thomas and Doris Ammann. On the night, another renowned gallery owner, Larry Gagosian, helped make history when he won Andy Warhol’s “Shot Sage Blue Marilyn” (1964) for $170 million ($195 million with fees). In 1986 it was Gagosian who sold his work to Thomas Ammann. It is now the second most expensive work ever sold at auction and the most expensive piece of 20th century art.

The staggering amount was still below expectations — the painting was valued at $200 million, with some hoping it would beat the record-breaking outlier, Leonardo da Vinci’s “Salvator Mundi” (c1500), which was sold for $450 in 2017. million was sold.

Against the backdrop of falling stock markets, some feeling prevailed, but the Marilyn marked the end of a decent auction, of which 33 other 35 different and often avant-garde works came within estimated sales (two unsold), bringing a total with the Warhol of $273 million ($318 million with fees, estimated at $285 million – $421 million). On May 13, another 66 works from Ammann’s collection will arrive at Christie’s, all of which will go to children’s charities.

New York’s Sales Season has only just begun. “After several years of pent-up supply and demand, it’s like an Olympic two weeks, and Ammann was the opening ceremony,” said Ben Clark, chief executive of art consultancy Gurr Johns. At the time of writing, there was still a potential $2 billion worth of art coming to the evening auctions alone.

Christie’s began mixed-ownership sales of mostly 21st-century works on May 10, including trendy younger artists. This brought in a total of $87 million ($103 million with fees), which was within estimates but below initial expectations, as two works by Jean-Michel Basquiat — including a 1982 triptych — were valued at $30 million. withdrawn. The auction as a whole was relatively muted, perhaps due to the huge amount on the block this month. The top prize of the evening was $33 million for Gerhard Richter’s 1994 “Abstraktes Bild” ($37 million with fees, estimated at $35 million).

The extended auction season has not necessarily good news for the coinciding art fairs in New York. “People are waiting to see what happens with these sales,” said Manhattan dealer Emmanuel Di Donna, who attended Tefaf New York (May 6-10). He sold works, including gouaches by Max Ernst and André Breton, though he said these were in the $100,000-$300,000 price range, “rather than millions of dollars.”

While the lines blur between auction houses and galleries, the mega dealers are expanding their capacities in the secondary market. This week, David Zwirner is launching a consignment tool that allows prospective sellers to quickly submit their art for evaluation via desktop or mobile phone. The gallery hopes to entice supply to meet current demand for blue-chip art, says senior partner Kristine Bell.

Resale isn’t new to the gallery — Zwirner says they’ve been part of his business since it launched in 1993 — but the move follows a surge in such deals, exacerbated by the Covid-19 pandemic and a lack of public shows. “We were forced to be a private dealer,” Zwirner says. He describes the difference between the two business areas: “In the primary market you try to introduce people to something they don’t know; on the secondary market you fill and identify gaps in their collections.”

While margins for new work are typically higher (about 50 percent), the secondary market offers historic works that are increasing in value. Zwirner describes his commissions as “competitive” with the auction houses, where they can reach 26 percent. He says the gallery gets about 60 percent of its revenue by value from the primary market and 40 percent from the secondary market. “If you have a Warhol ‘Shot Marilyn’ you have to go to an auction house, but for many artists that is not the case.” His gallery has made secondary sales exceed public auction records for artists like Joan Mitchell and Ad Reinhardt, he says.

The Tezos Foundation, the Swiss non-profit branch of the Tezos blockchain network, has pledged £1 million to create a non-fungible symbolic art collection. The money was first entrusted to Misan Harriman, a photographer, NFT collector and social activist who is chairman of the board of the Southbank Center in London. His plan is to focus on emerging artists from Africa and Asia.

“As a black man, at the top of my game in photography, I know how lucky I have been and every day I think about people who have lost life in the lottery because of the social economy of their situation. Smart contract technology gives a combative opportunity for the democratization of merit-based opportunities,” says Harriman.

Works in the Tezos Foundation’s permanent art collection will be featured on its website and will be on physical display “sooner rather than later,” said Arthur Breitman, Tezos co-founder. The Foundation has about $1 billion in funds, he says.