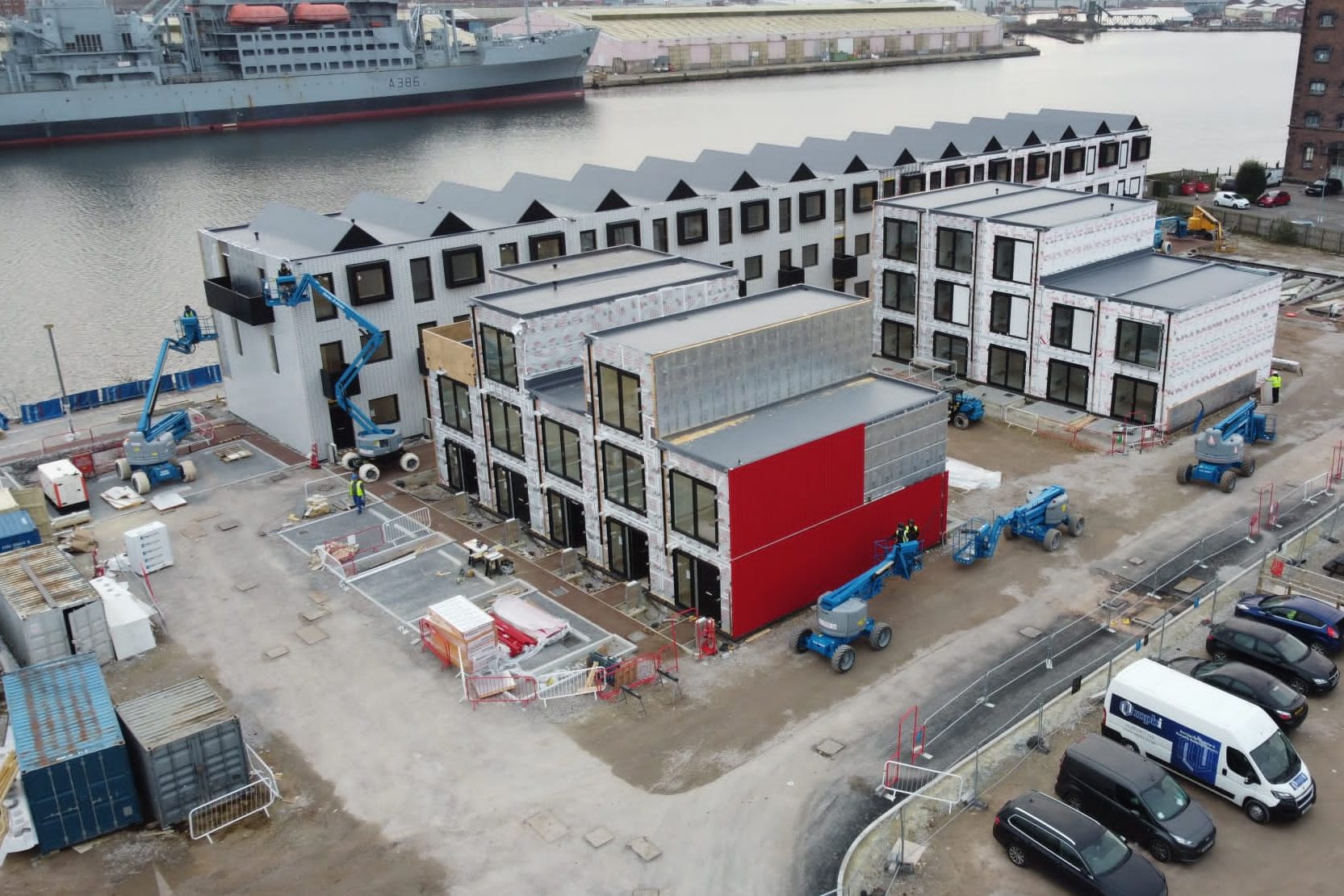 It follows the collapse last month of House by Urban Splash, which delivered the modular housing scheme at the Birkenhead Docks site.

Richard Mawdsley, director of development for Peel L&P’s Wirral Waters, said today: “Since House by Urban Splash was taken into management, Peel L&P has taken control of the East Float housing project and will be responsible for the progress of the development.

“Our contractor, who is unaffected by the administration, is on site and key personnel have been retained to ensure the practical completion of phase one of the project, which includes 30 homes.

“We expect to reach practical completion within a few weeks.”

He added: “The housing products we have delivered in phase one and which we intend to deliver in phase two have been designed by Liverpool-based architects, Shedkm.

“Both the ‘Town House’ and ‘Row House’ homes have been designed so that they can be built using a variety of methods, including traditional, full volumetric and panel delivery.

“The different approaches to delivery do not affect key features such as the 50% reduction in energy costs when comparing Town House to a comparable new build home.

“We are now working with the architects, our contractors and others to finalize our approach for the completion of phase two, the next 55 homes, which we are confident will be completed on schedule.”

He said plans for the final two phases of the East Float project will not cover the House by Urban Splash factory in Alfreton, Derbyshire, which lost 160 jobs after the administration, and will be delivered as intended.

Mr Mawdsley said: “The overall delivery trajectory for this particular development at Wirral Waters will not be adversely affected by the plant closure, and it will be delivered in full and on time.

“East Float is one of three housing projects now on site along the new Northbank neighborhood area of ​​Wirral Waters, which together will deliver more than 1,100 new homes over the next few years.

“This includes the catalytic 500-home Millers Quay development which is also on site. These plans will sit alongside new public spaces, parks and walkways along the harbor, much of which has already been completed, creating a new, diverse and sustainable community at Wirral Waters.”

House by Urban Splash was a subsidiary of the Manchester housing developer Urban Splash, which is unaffected by the administration handled by Teneo.

House by Urban Splash was a joint venture between Urban Splash, the Japanese home builder Sekisui House and Homes England. The two main shareholders owned 48% of the company, while Homes England owned the remaining 4%.

The modular business was spun off from the main group in 2019 when Sekisui House and Homes England invested £55 million in the business.

Co-Manager Adrian Berry said at the time of the appointment: “This appointment follows several operational issues related to the Alfreton plant, which have had an impact on the wider group.

“We will now seek to stabilize the US House Group by providing a platform to complete certain developments and explore sales options for the plant and the other development sites.”