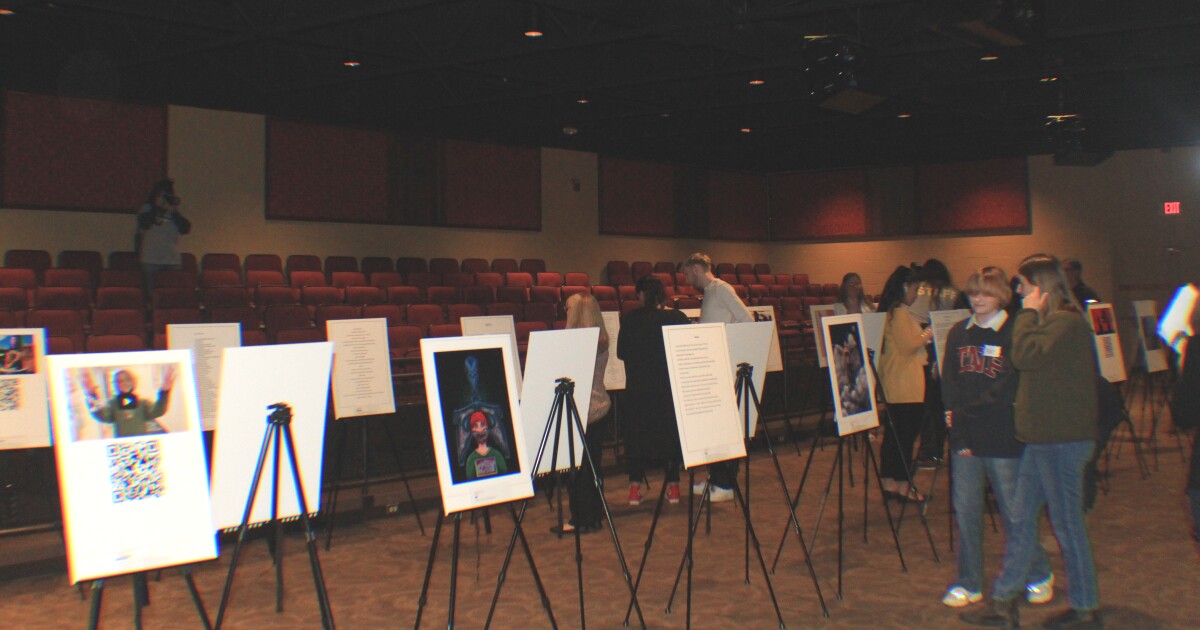 A blue face with pupilless, dripping gray eyes sticking out his tongue. Resting on the tongue is a small orange and gray pill, the same colors that burst from the figure’s head.

This striking painting is the work of Mars Dobra, who attends the Granite State Art Academy in Salem. It is also the teen’s entry to the Magnify Voices Expressive Arts contest.

The painting, Dobra explained, is based on his own complicated relationship with taking medication for depression.

“At first I thought so [the medication] would be like a panacea,” Dobra said. “But now I’ve learned that it’s a process. You also have to go into therapy and get better physically and mentally to really be in a better place.”

While he was proud of his own piece, Dobra felt it made sense to be in an exhibition with other artists who shared some of his experiences. All entries were based on artists’ experiences navigating mental health issues. Dobra said he loved the feeling of reading a poem and thinking: oh yeah, i get that.

Student artists shared some of their most vulnerable moments in their art and on stage at Tupelo Music Hall in Derry Wednesday night.

One artist wrote about how painful it can be when classmates joke about their anxiety and depression.

The Magnify Voices contest was created in 2019 by a member of an organization called NH Children’s System of Care. The founders hope the contest can draw attention to the flaws in New Hampshire’s behavioral health system.

For some artists, displaying their work proudly was a way to combat the pervasive stigma that often rests on people with mental illness.

Lillian Bittman, 18, of Concord wrote about how her hospitalization last year was a catalyst for realizing that being alone is not synonymous with being lonely.

Bittman said she tries to be open about her mental health in her daily life.

“It’s not something we should be ashamed of,” she said.

Listen to the audio to hear how Lillian Bittman shares her work.